It started out as a typical early December Sunday in Claremore. The weather was cool, but sunny. For most, thoughts were turning toward the approaching Christmas holidays. Many families had attended worship services and were back home.

Throughout the community and surrounding area, most everyone was preparing to sit down for Sunday dinner.
Then, like a typhoon wave, the news started spreading from house to house. Many heard it on their front-room radios. Others heard the news from their neighbors.
At first, theinformation was sketchy. As more and more broadcasts came across the air, it became all too clear.
The United States was being attacked. It was Dec. 7, 1941.
Radio reports were saying that Japan had attacked a little-known place called Pearl Harbor near Honolulu, Hawaii.
We were at war.
The first Japanese attack came at 7:53 a.m. Hawaii time. Here in Claremore and the rest of the Central Time Zone, it was 12:53 p.m. The first targets were the battleships and shipyard facilities in Pearl Harbor and the nearby airfields. The news of the sneak attack was broadcast to Americans via radio bulletins. All afternoon, the popular Sunday entertainment programs were interrupted.
Claremore residents learned more the following day. The Dec. 8 edition of the Claremore Daily Progress had this headline: “WAR Between United States-Japan, Emergency Exists, Quick Action on President’s Plea.”
The accompanying story told of Congress’ vote for a formal declaration of war against Japan. This was the answer for Japan’s “unprovoked and dastardly” attack on Dec. 7.
Also on that front page was an article urging the local boys and girls to mail their Santa Claus letters to the newspaper office.
Even with the United States now at war, residents of Claremore and residents across the rest of the country knew they must carry onward the best they could. Another short story said that the Claremore Junior High basketball team would play the first game of the season that night at the National Guard Armory at the corner of 2nd and Catalayah streets. The streets in years to come would be renamed Patti Page and Lynn Riggs boulevards. The high school team was scheduled for the following night.
During the middle of the week, it was reported that 22-year-old Jake William Brown, a resident of Rural Route 1, had walked from his home to town. To show his patriotism, he was at the door when the Rogers County Draft Board opened Monday. He was there to volunteer his services. Brown made the same journey a week later, again by foot, to enlist.
When the American Legion and Auxiliary held their annual Christmas party on the following weekend, they voted 100 percent to not send out their regular Christmas baskets. Instead, it was decided to send specially prepared boxes to various military camps where Claremore’s young men already were serving. Post commander Gordon Talley and Miss Gazelle Lane, Auxiliary president, were asked to appoint committees to work in conjunction in this project.
The department store J.C. Penneys ran an ad in the Progress listing various nylon hosiery for 79 cents, $1.19, and $1.35. At the time, no one realized how scarce nylon would become over the next four years. 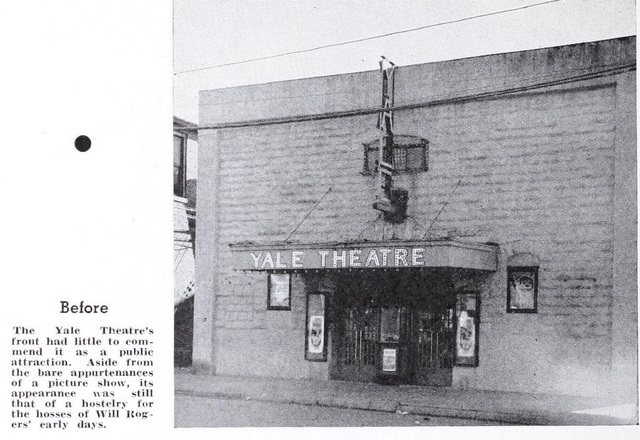 At the Yale Theater, the western movie “Texas” was showing. It would be the last movie for a while for stars William Holden and Glenn Ford. Both would soon enlist; Holden going to the Army Air Corps and Ford with the Marines.
At the movie houses and in most stores and businesses, posted signs urged Claremore residents to buy war bonds and stamps. Children would soon start collecting scrap metal and iron.
Major J.C. Resler, member of the local draft board, announced all Class 1-A registrants under the Selection Service Act would be ordered in for examinations. All other classifications would also be reviewed. In the meantime, the U.S. Marines were looking for “a few good men.” Applicants had to be physically fit, between the ages of 17 and 34, and between 64 and 74 inches (5-4 to 6-4) tall. Like the pony express riders almost 100 years earlier, applicants also had to be single, without dependents, and of good moral character.
Oklahoma Military Academy announced the school had accepted 50 new Cadets for the second semester. Normally, new students only enrolled at the start of the fall first semester. Officials said the change was to utilize the facilities to the fullest for the senior reserve officers training course.
Getting back to the American Legion project, by Dec. 18, 106 names had been submitted for the holiday boxes. All 106 names were listed on the front page of the paper. Many more would be added in the following days. Only a few months earlier, many of the same names had appeared in the newspaper’s sports articles as they played high school sports.
As Christmas drew closer, the local grocery stores increased food ads. Safeway would be taking orders for turkeys with a guaranteed purchase price of 29 cents per pound. A roast was available at 25 cents per pound. About the same time, a full-page ad for Warehouse Market listed more than 300 different items on sale. The prices ranged from 5 cents for a 15-ounce can of pork ’n’ beans to $1.29 for a sack of flour … a 48-pound sack. As many of these store items became rarer over the next months, people started growing their own vegetables in so- called “victory gardens.”
Southwestern Bell also had a notice in the newspaper. Thinking ahead, the phone company apologized in advance for the thousands of future delayed conversations that would occur over the holiday period. It would be vital to keep lines open for Army and Navy defense matters.
Another consistent reminder here of the war overseas was the many troop trains rolling through town on a daily basis. Most of the young soldiers and sailors probably didn’t know where they were going, but all knew what they were leaving behind.
Another feature at the Yale during this time period was a musical comedy starring Mary Martin and Don Ameche. It had nothing to do with military service and the current times. Still the title stood out. The movie: “Kiss the Boys Goodbye.”
Here in Claremore, and everywhere else, the kisses were for the goodbyes and the following countless prayers were for them to come home again.
It all happened 66 years ago this weekend.