Telling the History of Claremore…one story at a time
HISTORY OF COOWEESCOOWEE DISTRICT
Part I
BY
MYRON A. HURD
Submitted by the Claremore Museum of History
Probably no area in Oklahoma enjoys a more fascinating history than Cooweescoowee District, Cherokee Nation, which encompasses the area referred to as “The Will Rogers Country.”  It’s modern version as we know it began about 144 years ago when Jean Pierre Chouteau persuaded some of the Osage Indians, with whom he held exclusive trading rights from the French government, to move from their Osage River homes in Kansas and Missouri to this area.  He established a trading post at Salina on Grand River in 1796 to keep them supplied and buy their furs.  This was 7 years before U. S. government acquired title to this area (1803) through the Louisiana Purchase. 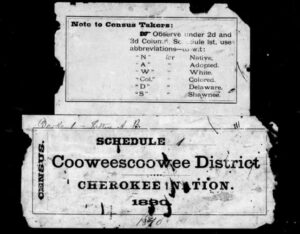