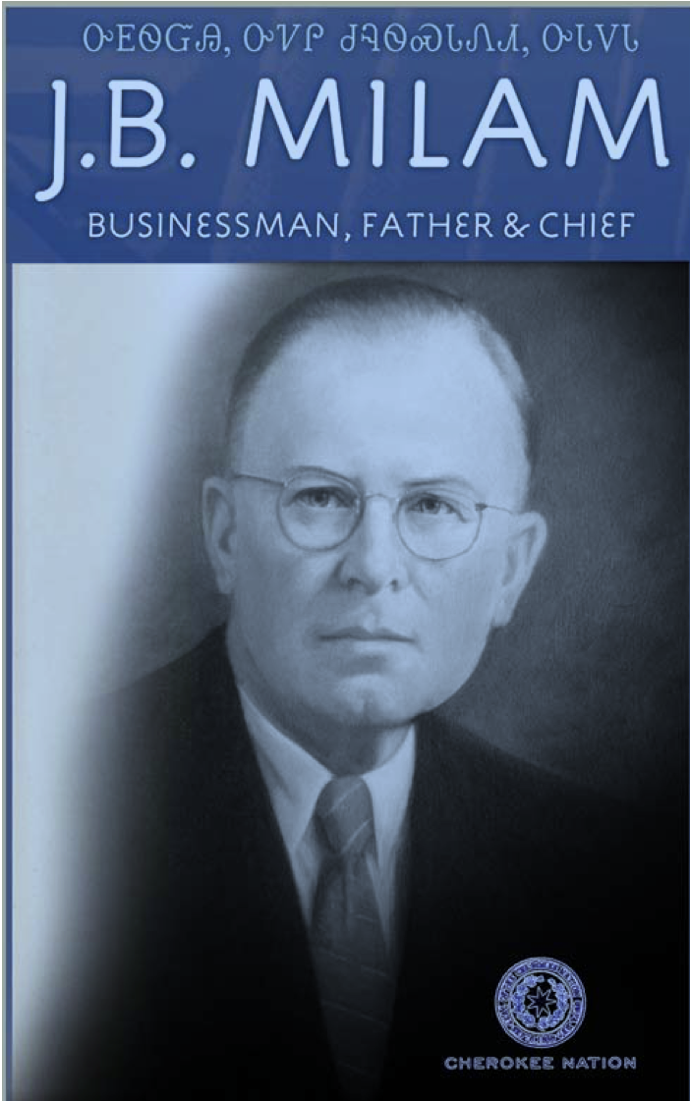 This story was printed in The Ranchman Magazine, December 1953nby Myron A. Hurd.

Back in March 1948, I wrote in “The Country Correspondent” column for the Claremore Progress about a trip I took with the late Chief of the Cherokees, J. Bartley Milam of Claremore.  I would like to begin this story about Mr. and Mrs. J. B. Milam with a few excerpts from this 1948 column.

“Chief of the Cherokees, J. B. Milam, took his son, Stuart of Chelsea, L. S. Robson, (Claremore banker and rancher,) Charley Fawks (now a Pryor banker) and myself to the monthly meeting of the Tulsa Farm Club, of which Milam is a member.  The crowd was awfully wealthy company for this lowly writer.  While the talk centered around buying 1000 acre ranches and train loads of steers, I felt in my pocket again just to make sure that I still had the price of one beef steak.

The trek was made to hear Emil Schram, president of the New York Stock Exchange.  Now what in the world could the president of the stock exchange know about farming, you wonder?  So did I, but not for long.  It was astounding how this ex-country boy had kept his feet on the ground.  He talked soil conservation, conservation of all natural resources, and had a sound understanding of such matters.

Schram closed with the surprising statement, “The American farmer is the first man of the land, and he will be the last man.”  Fancy that, from the heart of the biggest city in America-a city that has four times the population of Oklahoma.”

“Chief Milam had his feet on the ground too.  We recently went over some of his land together.  It was sheer will power that drove him on and on afoot until we had accomplished our purpose.  He never uttered a complaint-just a remark that he wasn’t young any more.  His determination was an inspiration to me.

One associates the lovely and gracious Mrs. Milam with teas, corsages and receptions.  But, J. B. says she is a regular ranch woman.  It was only two years ago that Mr. Milam forked his cow pony and roped a recalcitrant cow and Mrs. Milam grabbed hold of the rope and helped snub the animal to a post while an orphan calf helped himself to dinner.  They had to repeat the roping and snubbing act for three or four days before the cow adopted the calf.

I concluded the column by saying “America need have no fear of going soft as long as we have men and women with the nerve and determination of Mr. and Mrs. J. B. Milam.”

Since writing that column, Mr. Milam’s allotted years ran out, as his many friends and wide acquaintances over the state and nation know.  Mrs. Milam gave me a copy of this column, which Mr. Milam had clipped from the Progress, when I visited her in her mansion on the hill west of Claremore one evening recently.  She led me into their parlor and pointed to the lights of Claremore in the valley, and explained how proud Bartley was of this view and how he liked to share it with his friends.

Mrs. Milam took me to their library which contained the outstanding collection of books and papers on the Cherokee Indians in Oklahoma at the time of Mr. Milam’s death.  She said that Bartley had spent a fortune on them, but was so proud and satisfied with them.  As I looked at the library, then at the lights of Claremore blinking in the valley below, I caught something of the feeling of satisfaction and deep pleasure which Mr. Milam must have enjoyed.  All of his life he had worked for the betterment of the Cherokees, as Mrs. Milam put it, and here in his library he preserved historical documents that the story of their trials and hardships would not be lost to posterity.

Another of Mr. Milam’s achievements was recognized on June 28th of this year when a six mile stretch of road between Salina and Kenwood was dedicated as the Milam highway.  This road gives the Cherokees an outlet to the west.  On the program were many prominent Cherokees, including W. W. Keeler, present Chief, W. E. Sunday, Claremore realtor, Earl Boyd Pierce of Muskogee, Honorable W. O. Roberts, Rev. Jim Pickup and T. R. Cobb.  Mrs. Milam accepted the plaque of dedication in honor of her husband.

Mrs. Milam said that she and Bartley used to go to North Carolina every year for the Cherokee Indian fairs and celebrations and that they enjoyed hearing the musical language the true Cherokees spoke and seeing the bountiful crops they raised.

J. Bartley Milam was a builder.  Besides their fine home in Chelsea and a large farm home on their farm a mile north of Chelsea, he built improvements on many farms he owned from time to time.  He built two fine sets of improvements on a dairy farm just north of Oklahoma Military Academy.  He built a lodge near Eucha on Lake Spavinaw along with others of the Claremore Outing Club.  He had a hand in many civic improvements.  When soil conservation came in, he put every farm he owned or leased under soil conservation agreement because he wanted to see the soil conserved. His crowning achievement was perhaps his palatial home in Claremore in 1941, when he moved to Claremore to take over the presidency of the Rogers County Bank.

Both Mr. and Mrs. Milam came from sturdy, pioneer Cherokee stock.  He was 1/16 and she is 3/16.  Milam was born in Texas in 1884 and moved to Indian Territory near Chelsea in 1887.  His first schooling was at Alluwe.  He later attended the Male Seminary in Tahlequah and Chelsea High School.  He assisted his father in hardware and oil field supplies business in Chelsea until 1904 when he formed a partnership with his brother-in-law, Woodley Phillips, now in San Diego, California and drilled their first oil well on Milam’s allotment near Alluwe.  It was a producer.  At the time of his death they had over 1000 producing wells, mostly in the Alluwe and Chelsea areas.

Mrs. Milam says that Bartley always was determined to acquire the things he wanted.  As a lad he cleaned cuspidors, delivered groceries and did other odd jobs to get funds for his needs.  He was largely self-supporting from the first.  After their marriage in 1904 they moved to Nowata where Mr. Milam was employed as a bookkeeper for oil developers, Barnsdall and Broden, for $75 per month.  He made his reports to Pennsylvania, Mrs. Milam said.  They moved back to Chelsea in 1906 and lived there or on their nearby ranch until 1941 when they moved to Claremore.

Mrs. Milam (Elizabeth McSpadden) was born and raised on a farm one mile west of Chelsea, now owned by A. J. Krivolavek.  During those years her father ran large herds of cattle and shipped to St. Louis.  He always bought surprises in St. Louis for the family.  She has part of a bedroom suite and an old-fashioned round parlor table, solid walnut, which he shipped to Chelsea for her mother.

Mrs. Milam attended Drumgool school, then grade school in Chelsea, Willie Halsel College in Vinita then the Female Seminary in Tahlequah.  To get to Tahlequah, they would catch the Frisco to Claremore, take the Iron Mountain to Ft. Gibson, then take a hack to Tahlequah.  The hack made a regular run from a livery stable in Ft. Gibson.  She was in school when the railroad was built from Fayetteville to Muskogee through Tahlequah.  The officials let school out and the whole town turned out to celebrate the coming of a train to Tahlequah.  The railroad was finally abandoned and the tracks were removed during the last World War for scrap iron, she said.  Now Tahlequah is an inland town again, served by modern busses instead of hacks.

On May 7th this year, Mrs. Milam relived their Female Seminary days again with many of her classmates and teachers.  It was the 50th anniversary of their graduation from the Seminary in 1903 and her children arranged the anniversary celebration even to hotel accommodations and meals.

While reminiscing about her school days at Tahlequah she told how the boys from the Male Seminary, Bartley Milam among them, would come to their dormitory once each week and serenade them, and how romantic it was.  “We girls would all stick our heads out the windows to see the boys and the teachers would all stick their heads out the windows to see that the girls did not get out of line.”  She said.

Mrs. Milam had four brothers and two sisters.  Two brothers are deceased.  Ted of Nowata is a well known oil man and cattleman around Chelsea and Nowata.  He has 700 acres on which he runs about 100 head of registered Herefords and a tenant runs a bunch of milk cows.  He roped with Will Rogers at the St. Louis Worlds Fair in 1904.

Mrs. Milam’s brother, Booth, lives in San Diego as does her sisters, Mrs. Woodley Phillips and Mrs. H. L. Morrison.  These folks are all well known around Chelsea and Claremore and return often to see their many friends.

The Milams have three children.  Stuart resides in the old home in Chelsea and manages the extensive oil interests of Phillips-Milam.  Mildred is the wife of Philip Viles, well known Claremore Insurance man and Civic leader.  Mary is the wife of banker George Stevenson of Tarkio, Missouri.

Some of Mrs. Milam’s happiest hours are spent in her spacious home when all of the children and grandchildren, of which there are eight, and perhaps some of their close friends, are with her.  She served 23 for dinner, and again for supper on Will Rogers Day of this year.  “I can cook but I don’t particularly like to any more,” she said.  But a lot of company for dinner does not bother her much. She got used to it on their ranch when they had company for almost every meal.

There was one ambition which Bartley Milam failed at.  It was the location of Sequoyah’s grave in old Mexico.  But his friends Dr. Ballinger of N. E. State College and Frank Muskrat have taken an interest in finding the grave and perhaps it shall yet be accomplished.  But in his books and his constructive work for Indians in northeast Oklahoma, Mr. Milam has left a monument to his name for his good works.

Mrs. Milam is so appreciative and grateful for their blessings and says she could not live without her own folks close by and her good friends.  There is no question but what her neighborly ways of pioneer days are with her to stay.