Lynn Riggs, distinguished playwright and poet, was born on August 31,1899, a few miles south of Claremore in Indian Territory. The famous movie actress, Bette Davis, believed Riggs to be “one of the most important contributors to the American theatre.” The Lynn Riggs Exhibit in the Claremore Museum of History showcases his legacy.

Primarily known for pop and country music, Patti Page was the top-charting female vocalist and best-selling female artist of the 1950s, selling over 100 million records during a six-decade-long career. She was often introduced as “the Singin’ Rage, Miss Patti Page”.  Patti was born Clara Ann Fowler and is a citizen of the Cherokee Nation. She changed to her stage name while singing on Tulsa radio sponsored by Page Milk.

Stuart A. Roosa was an American aeronautical engineer, smokejumper, U.S. Air Force pilot and NASA astronaut who was the Command Module Pilot for the Apollo 14 mission. The mission lasted from January 31 to February 9, 1971, and was the third mission to land astronauts on the Moon. Roosa conducted experiments from orbit in the Command Module Kitty Hawk and is one of 24 people to travel to the Moon.

The Andy Payne Family Collection is housed at the Claremore Museum of History. This collection consists of art, historical artifacts, letters, manuscripts, and photographs relating to the life of Andy Payne, and the International Trans-Continental Footrace of 1928.  He ran the 3,423.5 mile route from Los Angeles to New York City, much of it along U.S. Route 66, in 573 hours, 4 minutes, 34 seconds over an 84-day staged run.

Claremore Museum of History unveiled the Building Heritage, History and Hope Exhibit on June 19, 2021.   The exhibit chronicles Claremore’s rich Black history and shares a glimpse into what growing up as a Black citizen in Rogers County was like in the days prior to segregation. 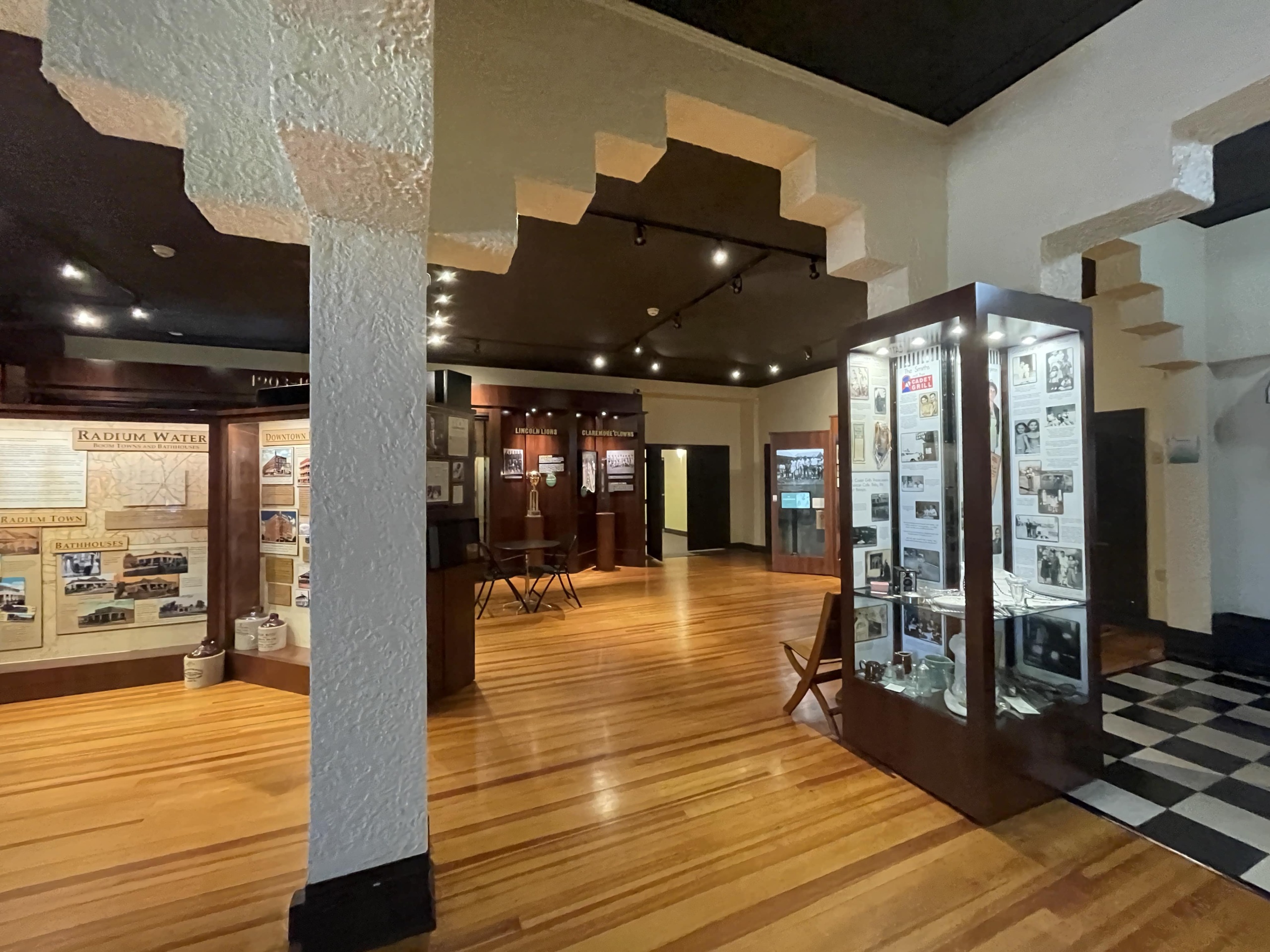 The Cadet Grill Exhibit was opened on August 16, 2014. This exhibit celebrates Judy Smith Eagleton, an integral leader in the early development of the Claremore Museum of History. Judy’s collection of historical artifacts pertaining to the history of the City of Claremore resides in the museum.

The Early History of Claremore Exhibit was opened on September 21, 2016. Featured in this exhibit is an extensive timeline of photographs and artifacts of the City of Claremore from early inhabitants until the end of the 1930s.

Claremore Public Schools Exhibit opened on May 17, 2017. Featured in this exhibit is a timeline with photographs and artifacts that illustrate all of Claremore Public Schools from 1893 to present day. Histories of the school’s superintendents, high school principals, band directors, and football coaches are on display. This exhibit recognizes students’ achievements in a kiosk that includes Claremore High School yearbooks, National Merit Scholars, and Oklahoma Academic All-State students.

The Radium Town Exhibit documents the history of the interesting story of the health cures that early Claremore offered to the world.  In 1903 George Eaton was drilling for oil on the east side of town, and instead of striking oil, he found “rotten-egg smelling” water. Eaton took the foul water and threw it into a nearby stream. A neighborhood dog that was sick jumped into the water and within a day, the dog was cured. Eaton tested the water and decided to name it Radium Water, even though there is no actual radium in the water. After this finding, Claremore’s Radium Town was born.