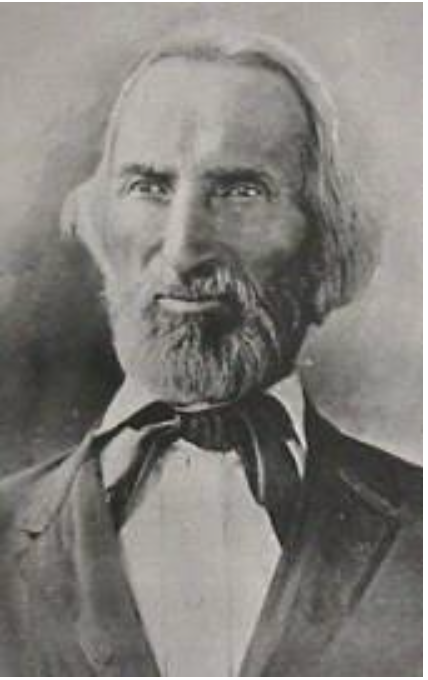 This story was published in The Ranchman magazine July 1952. Written by Myron A. Hurd.

This is a story about a good Indian Chief and a good Christian, peace-loving man.  He was Charles Journeycake, last chief of the once powerful tribe of Delaware Indians.  In his latter years he was literally “The voice crying in the wilderness.”  It was largely through Chief Journeycake and his good wife, Jane Sosha Journeycake that Christianity came to the Delaware settlement near Al-lu-we after their removal from Kansas in 1867.

The removal of the Delaware Indians to Cooweescoowee District, Cherokee Nation, Indian Territory, after the civil war was a heartbreaking experience for the chief and his followers.  It marked the fourth such removal in a century to make room for the white man. This final removal to I. T. eliminated the tribal form of government as the Delawares were absorbed into the Cherokee Nation as Cherokee citizens, with the chief forfeiting his status as a chief.

The Delawares suffered many hardships and sacrifices in their new land.  The Cherokees, who had already settled the land around Lightning Creek, as the settlement was called then, resented the government moving in another tribe to settle their lands.  It was natural that conflict and bloodshed should follow.  There was no legal recourse for the Delawares.  While the Federal government provided protection for the Indians against white abuse, they had no jurisdiction over the disputes of two Indians.  The territory was full of criminals and renegades and life was very cheap.  The Chief’s own brother fell victim of an assassin.

While violent death occurred all about, and his own house was attacked with murderous intent, Chief Journeycake lived without fear.  Only his great faith in the white man’s Saviour, and an abiding conviction that he was destined to live a long life of service to his people, gave him courage to carry on.  He once had a vision of a great sheet of paper stretched across the sky with many names written on it, his own among them.  A hand lengthened his name across the page and he heard a voice saying, “We must lengthen this life.”  This vision so impressed him that he never once faltered in his faith, though the trials and tribulations of his people were nearly unbearable at times.

Chief Journeycake’s mother, Sally, was the tribe’s interpreter for the Moravian missionaries who established the first Indian Mission in Kansas Territory in 1829 whence the Delawares arrived from Sandusky, Ohio.  Charles was baptized in 1833 at the age of 16, probably the first Christian to be baptized in Kansas.

Journeycake began preaching while a young man in Delaware, Shawnee, Wyandotte, Seneca and Ottawa dialects.  He travelled far and wide over the plains attending Indian councils, preaching and hunting.  He became Chief of the Wolf clan in 1855 and principal chief of the Delawares in 1861, a position he forfeited upon their removal to I. T. in 1867. But he continued to serve his people as Chief Counselor.

Chief Journeycake’s recreation after coming to Indian Territory was hunting.  He hunted deer, bear, turkey, and rode after the hounds in chase of fox and coyotes, even in his latter years.  He lived until 1894 and is buried, as is his wife, in the Alluwe (Armstrong) cemetery.  The inscription reads, “A Kind and Loving Father and a friend to the needy; he died as he lived, a pure and upright man, after many years of faithful service in the ministry and as Chief Adviser of his people, the Delawares.”  The inscription for his wife reads, “None knew her but to love her.”

These gentle, religious people were truly disciples in a wilderness of hostility, both from the elements and mankind.  His daughters were all cultured and educated, perhaps above the capacity of appreciation of the many unsavory characters who roamed the territory largely immune to the law.  Reverend S. H. Mitchell, who followed Reverend Charles Journeycake as pastor of the Delaware Church after the latter’s retirement in 1890 eulogized the old pastor for his gentle, Christian traits in his book “The Indian Chief, Journeycake” which was published in 1895 by the Baptist Mission Board.

It was a cold wind in April, the kind Oklahoma is able to deal upon a short notice, reaching through my garments to chill me through and through, when I drove to Alluwe one day recently to look over this site where Journeycake settled his Delaware people 96 years ago.  I stopped beside Oklahoma #28 highway two miles north of Alluwe to read the inscription on the marker which was erected in 1933 by Chief Journeycake’s grandchildren, Roberta Campbell Lawson and Herbert Lockhart Campbell.  It reads “1200 feet east and 300 feet north stands the residence built in 1867, former home of Rev. Charles Journeycake and his wife, Jane Sosha Journeycake.  He was the last tribal chief of the Delawares and pastor of the first Delaware Baptist church in Indian Territory.”

(Note: Prior to construction of the Oologah Dam, the graves of Charles and Jane Journeycake were relocated to Nowata Cemetery.)

We drove to this former home of the Chief where the present occupant kindly admitted us to view the interior.  The ancient logs of the original log cabin home still show in the clothes closets.  The antique fireplaces and other fixtures showed that the Journeycake family had culture and education.  Like an oasis in a droughty desert, the Journeycake home provided one of the few sources of good books, latest periodicals, musical instruments and an atmosphere of refinement, in the sea of bluestem grasses and wild game around them.

The Delawares were said to be parent stock of the 149,000 Indians living east of the Mississippi River about 1800 and were called Lenni Lenape or original people.  They occupied the area from Potomac and Hudson Rivers far into the Interior.  When Hudson anchored his first ship off New York Island in 1609, Delawares stood on the banks in great numbers and exclaimed, “Behold, the Gods have come to visit us.”

The so called Gods came in such great numbers, however, that by 1768 the Delawares were forced to cede their lands and move west of the Alleghenies to Ohio.  The Christianized Delawares laid down their arms and became peaceful Indians, but they suffered such abuses from the whites on the one hand and hostile Indians on the other that they disgustedly forsook the Christian religion and forbade missionaries to come among them.

In 1781 many of the Delawares were removed to vicinity of Sandusky, Ohio where Charles Journeycake was born in 1817.  The outrages against the Indians became so intolerable that many of them fled to Canada for protection.  In 1829, when Charles was 12 years old, they were again forcibly removed, this time to far away Kansas Territory.  The only Delaware to remain steadfast in her Christian faith through all of these ordeals was Sallie Journeycake, Charles’ mother.  Reverend Mitchell in his book reports that the Chief often told him what a powerful influence his mother’s religion had upon him.

Even in Kansas the Delawares were not to remain unmolested.  In 1866 the Commissioner of Indian affairs reported, “Kansas is so filling up with energetic citizens who appreciate good land, and with Indian Reservation being the best in the state, but one result can be expected.”  The Delawares were removed to Indian Territory the following year.

When Chief Journeycake organized the Delaware Baptist Church seven of the eleven members were from his own household.  When Journeycake was ordained as pastor of the church in 1872, Rev. G. J. Johnson, Baptist Missionary secretary came for the services.  He reports that the Chief met him at Vinita, 18 miles from Alluwe, in a fine covered carriage, silver tipped harness and a span of spanking bays, a joy to drive or ride behind.  He described the Journeycake residence as a neat frame structure, on ample lawn, with abundant shrubbery and shade in the center of his vast holdings and vast herds of cattle. Journeycake had sold $1800.00 worth of cattle the day before, he reported.  He also spoke of the books, periodicals and musical instruments and how the family possessed intelligence and culture.

The day of the dedicatory services for the church, which had been financed largely by Journeycake at a cost of $1300.00, the house was filled to capacity with Indians, three white missionaries and one white man.  The Chief took over the services and preached after the third day and there were fifteen converts.  In ten years of preaching Rev. Journeycake increased the membership of his church from eleven to 266.

In such a manner did the Delawares, who had been so wronged repeatedly by the whites, return good for evil in helping to Christianize wilderness areas for white man’s occupation.  There are few Delawares left around Alluwe today.  They have finally been swallowed up so completely by greedy settlers that they have lost their identity.  Only here and there does one see Indian features upon the countenances of mixed bloods.  It isn’t a pretty story, but it is a true one. 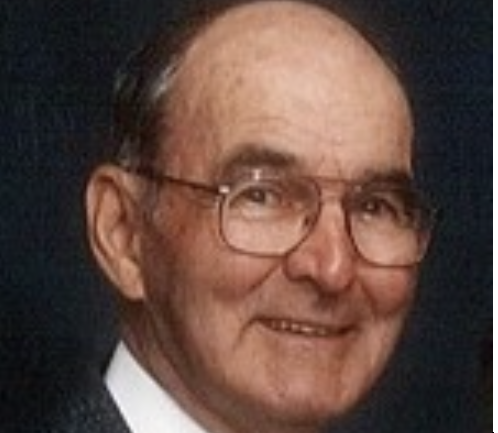 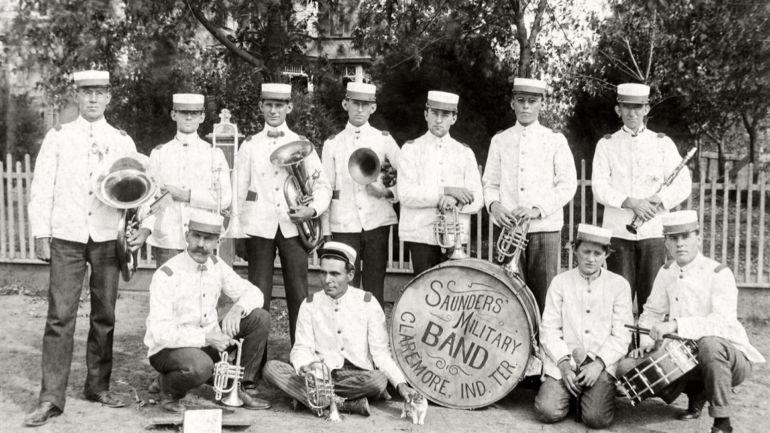